Hey, Arne. I'm just checking back to see if you put your laser-like focus on those articles I posted for you a while back. They were GREAT reads, weren't they? I'm certain you enjoyed them as much as I did.


But I'm not sure you were reading for meaning because today, at your press conference with Governor Snyder.... (loving that you're on twitter!):

...well, I've gotta bone to pick with you. Teachers and unions have been talking!!!!! YOU JUST HAVE CHOSEN NOT TO LISTEN TO US!!!! (Sorry to scream at you, but sometimes, you just really piss me off! ...OK... ALL the time you piss me off!) I mean, really, how dense can you be? Do you not get that not only are the policies you continue to push, failed policies, but you're also really pissing off a lot of your boss's base? No matter how determined you are to change the reality by spinning misinformation ad nauseam, IT IS NOT WORKING!!

Sheesh! I just get so steamed up over the stupid sh!t you say. But I'm not giving up on you, Arne. Nope, that would be shirking my patriotic duty and letting my students (and those across the nation) down. So in a continued effort to enlighten you by giving you facts (you know, those things that aren't made up or pretend), I'm including in your summer reading list, some highly regarded books by some of the finest minds in public education today. And Arne, don't let the facts scare you; let them guide you. After reading, you might want to do a compare and contrast between what these books say and what your Blueprint is pushing.
So when you're on your vacay relaxing, pick up any of these great beach reads. When you're done you'll be a better man for it... and hopefully a better Secretary of Education.

And as we used to say, back in the day: Have a bitchin' summer! See ya next year! luv, tracey xoxo 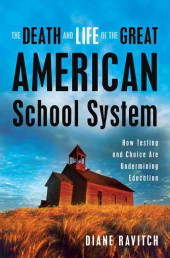 The Death and Life of the Great American School System:
How Testing and Choice are Undermining Education
by Diane Ravitch

Catching Up or Leading the Way:
American Education in the Age of Globalization
by Yong Zhao

Could we please use this money for healthcare-for-all and public education instead?

Join me in the Tweetosphere!

A Teacher Anon
Educator, writer, unionist, activist, defender of public education. I don't just think outside the box, I try to not even go near it.

Save Our Kids From Testing